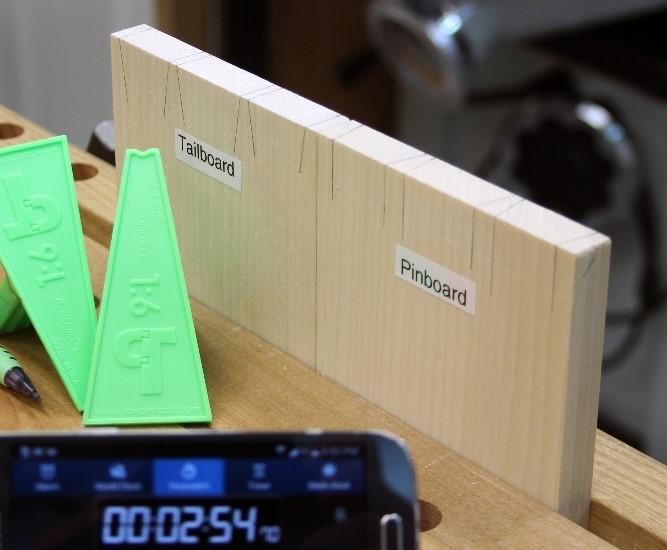 Ever since I made the statement that marking out dovetails is faster and more accurate using Tailspin dovetail marking gauges I have been getting the same question:

“How much faster is it?”

Well, if I had to guess at time saved, based on my own experience I would probably estimate twice as fast and half-again as accurate.  I have been woodworking for about 45 years and cutting dovetails for about the last 7 or 8.  The first one ever was a single tail in the end of a scrap of cedar and for some reason it has survived.  It’s just one of those things that wound up on a shelf instead of in the burn bin and it is a hack job to say the least. 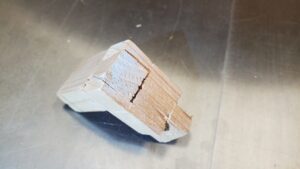 The time-saved using TailSpin tools comes from three places in the process:

First, lining up two boards that will eventually be joined is far easier in a flat face-to-face orientation than is it at right angles.  The advantages to flat face-to face are pretty great.  You get to use the other board as a reference for each.  You can place them on the bench standing on end and put them together using gravity instead of fighting it.  Just line them up like you would two sheets of paper before reaching for the stapler.  Instead of the stapler grab a clamp or stick them in your vise.  The alternative to this is the beginning steps of the transfer where you have to align two boards at right angles (and without a solid reference) and hold them there while you reach for clamps or try to mark them while trying not to move anything.  With Tailspin the ENTIRE balancing act of the transfer is GONE.

Second, when laying out the joint spacing that layout is going on BOTH of your boards.  Putting the collinear marks on both boards at the same time and marking them while clamped in a vise just makes sense.  For those of you who are in the Pins First camp I ask which board is easier to mark out?  I ask the same of you Tails First folks, and the answer I get from both is always the same:  THE FIRST ONE IS EASIEST because it is in the vise, easy to see and easily accessible. This also adds considerable accuracy.

Third, the marking out of the first board in either “First” camp using traditional tools is awkward and prone to error.  Starting with let’s say the indents of dividers used to walk off the spacing of the joint, you Pins First folks have to transfer those marks to the edge of the board to be able to use them. (Tails First folks can just strike the lines on the end grain).  Then both have to use a bevel gauge to continue those marks either across the end grain (PF) or down both faces of the board (TF).  A bevel gauge is an awkward and unbalanced tool, the weight is in the handle and the blade rather long for the task at hand.  (There is some savings to be had using a common dovetail square) Couple this with the fact that each and every line has to be carefully lined up by eye before marking and moving to the next.  We all know that you have to estimate where to put the square or bevel gauge to get your pencil point in the right spot.  We also know that the thickness of the pencil line changes as more marks are made.  (Even if you don’t adopt TailSpin Tools please do yourself a favor and get a mechanical pencil!!)  Using Tailspin tools you simply have to place your .7mm mechanical pencil on the collinear tic mark made when the boards were face-to-face and slide the tool into contact with the pencil.  From there you can pretty much relax while you marks two faces of the board.  Then, without moving the first tool slide the second into contact and mark the third face.  EVERYTHING after placing the pencil on the collinear tic mark is done by physical registration, NOT by eye.  The marks will be perfectly aligned on BOTH BOARDS.  You have both the ease of marking out a Pins First pinboard AND a Tails First tailboard using the boards’ own surfaces for solid registration every time.

Now back to the question of how much faster…

I thought about it and decided the best way to answer would be to run a side-by-side test. Since the test would be most accurate with the same person marking the dovetails I decided to film myself marking out a set of dovetails using TailSpin tools and then using traditional tools. The video is further down this page.

The short answer to the question turns out to be “A lot faster.” Using TailSpin I marked out and entire set of dovetails, that is BOTH sides of the joint, pinboard and tailboard in 2 minutes and 54 seconds. Using the traditional bevel gauge and square I marked out a set of pins, that is JUST the pinboard in 2 minutes and 5 seconds. By 2:05 with Tailspin I was already marking the tails on the other board.

I did not film the rest of the “contest”, but I did complete the work up to the point of having marked out tails on the second board in the traditional manner. First I cut those pins and removed the waste between them. This time did not count towards the side-by-side times because eventually the pins on the Tailspin joints would have to be cut also. I did count the time to mark out the tails from the pinboard including this part of the process: 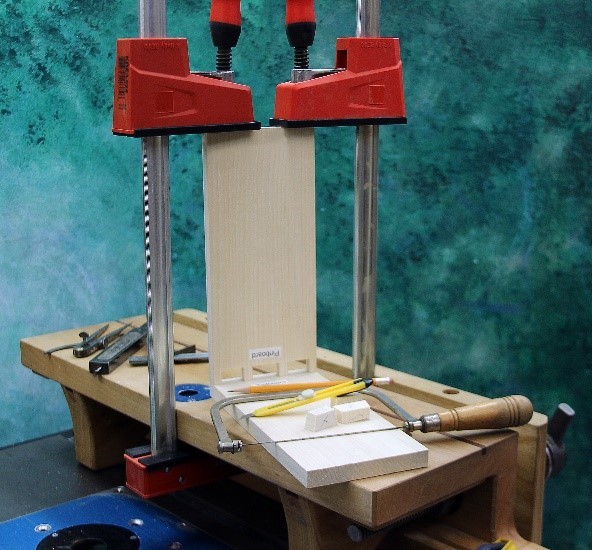 Getting the pinboard lined up to the gauge line and clamped perpendicular to the tailboard took me 3 minutes working alone. (that’s the average of 3 tries) I carefully transferred the pins to the tailboard with a pencil in about 90 seconds…then went back and repeated with a marking knife which took about 2 minutes, so we’ll split it at 1:45.  Then I put the tailboard in the vise and used a bevel gauge and square (with a pencil) to carry the marks from the transfer to the other 2 faces of the board.  That took 2:15 including taking the board out of the clamps, putting it in the vise and making the marks.

This makes the total time to mark both pins and tails using the transfer 9 minutes and 5 seconds or 6:11 longer than it took with Tailspin. When we consider the total marking time for a single box or drawer with 4 corners to be dovetailed the time really adds up.

Having done this exercise I think I’ll stop saying Tailspin gauges are faster and start saying “MUCH FASTER”!!

I’d like to take this opportunity to remind readers of this blog and users of our tools that TailSpin Calibrated Collinear Marking Tools are just that; MARKING TOOLS.  While I can state with total confidence and zero hesitation that joints marked out with Tailspin tools according to the instructions will have perfectly collinear lines on both the pinboard and the tailboard.  I can also state that if you cut perfectly to remove half of each of those lines you will get joints that fit perfectly.

What I CANNOT say is how good you are with your saws and chisels. For success, the goal is to cut to touch a line without taking the line away completely.  I resist saying “split” the line because I feel it is unrealistic, but if that’s how you roll, go for it!

If you’d like to see another opinion of layout tools debated and demonstrated (mine included), here’s a YouTube video on the topic found on the Wood By Wright channel: